As part of the Civic I/O: Mayors Summit at SxSW 2018 Austin, this workshop utilized future thinking methodologies (CLA, “The Thing from the future”, “The Polak Game”, etc) to inspire Mayors across the US to imagine their cities in 2030. 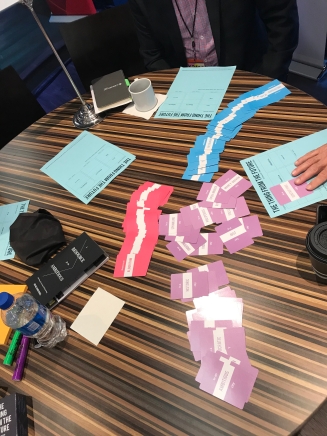 Diverse teams of designers, architects, and futurists co-facilitate the session and collaborate with artists to create the posters (artifacts) to be found in each City in the future.

The Artifact from the Future

Culver City is a filmmaking hub, having served as the location for thousands of movies since 1915, when town founder Harry Culver convinced producer Thomas H. Ince, filmmaker D.W. Griffith, and director Mack Sennett to build their new film studio along Culver City’s boulevards — Ince-Triangle Studios, which became the economic base of Culver’s “dream city.” Southwest of Hollywood, not far from Venice Beach, Culver City soon took on additional studios and became known as “The Heart of Screenland.”

Culver City retained its small-town feeling over the next century, even as nearby Los Angeles rapidly expanded in size and population. By the early 2020s, Culver City, while still home to Sony Pictures Studios, had begun to worry that its history and importance to the now-global film industry was often overlooked by both visitors and residents as they zoomed through Culver City on their way to Los Angeles. To address this, Mayor Jeffrey Cooper worked with local industry to develop FILMSTRIP BLVD-AR-X (Augmented Reality Experience), for which this poster is an advertisement.

FILMSTRIP BLVD-AR-X is an augmented reality journey into the heart of the American film industry. In 2030, Culver Boulevard is no longer just a road connecting Culver City to Los Angeles. Instead, passengers being transported from one city to the other in their self-driving cars are simultaneously transported into a vision of the past that celebrates the history of cinema and Culver City’s place within it. For a small fee, riders in every car can design their own experience via dashboard controls and enjoy a fully immersive experience as they are driven along, observing and even interacting with scenes and characters from classic films from any era or genre, all filmed or produced in Culver City.

“Let’s create a hub to celebrate our historic industry, its past and future.” – Jeffrey Cooper